Over the years, women are entering the professional arena in large numbers and with it has arisen various issues regarding women’s security, safety and maintaining women’s dignity and self-respect. In this direction, the Honorable Supreme Court of India has issued a directive to various organisations and institutions to set up commissions to monitor and safeguard the interests of women in the society as well as at their workplace. Gujarat University has also constituted a cell for the above mentioned purpose.

At College level, the Collegiate Women Development Cell (CWDC) began its activities in 2005-06. Dr M M Desai is the Founder-Convener of the cell and Prof Usha Venketesan is an able Co-convener. Together, they have inspired not only girls-students but also the boys of the college to actively participate. Since then, various efforts are being made to empower girl students by giving them self-defense training and enabling them to become financially independent by way of giving them vocational training. Over these years, we have conducted courses in Garment Designing and Development and Martial Arts and lectures on Peace and Harmony Stress Management,, competitions in Essay-writing, Elocution Workshops in Art and Craft, Yogasana and other such programs that go a long way towards the holistic development of our female students. 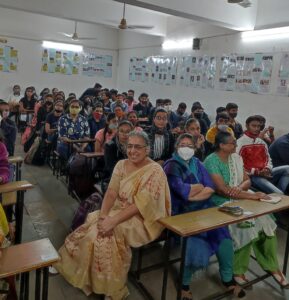 As part of the Azadi Ka Amriti Mahotsav to celebrate 75 years of Independence, students of CWDC had made charts about various Indian Women Achievers from different fields like, Sports, Politics, Literature, Films, Science and Industry, etc. since 1947. At first number of women was limited to 75 but then it had to be increased to 112. The project was exhibited as part of the orientation program for First Year students which was conducted on 17th December 2021. 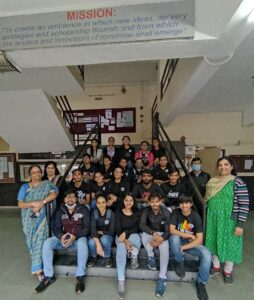 CWDC,RJTCC setoff the year’s activities with a tribute to a very important section of the society-its senior citizens. With an intention to explore how the youth perceived their elders an essay competition was held on the umbrella theme of Senior Citizens and the Society and students were given the freedom to explore sub-themes like Governmental policies, Students and Elders, How the experience of seniors can be assimilated for the society and Personal experiences.

Medium of expression were both, English and Gujarati and the competition was judged by Dr. Titiksha Dhruv, HOD, Department of English and Communication Skills

CWDC-RJTCC arranged an interactive session with the officers of the Mahila Police Station Ahmedabad(East), where the officers spoke on various activities the police conducts as part of Women safety . PI Vikram Tank, Crime Branch and PSI J.K.Pandya ,Crime Branch spoke at length on Cybercrime, IUCAW, AHTU,SHE-team and 181.The talks were followed by a question-answer session where students freely put up questions and got detailed replies to their queries. ORIENTATION PROGRAM.

An ORIENTATION PROGRAM for first year students. Our Chief guest for the event was Dr. Bharati Pathak, Director, School of Commerce, Gujarat University. Along with the students, all the college professors and the principal of the college had also attended the program. At the end of the program, volunteers who had actively participated in the events conducted by CWDC last year were felicitated with trophies and certificates. The program was a grand success.

As winters got colder this year, the CWDC-RJTCC was moved by the plight of those living in temporary homes all over the city. This initiated a drive the volunteers lovingly named Joy of Giving.

Initiated on the 20th of December, the mission was to collect enough stuff to be able to give out gifts in the first week of the new year. The volunteers started spreading word for a collection drive soliciting contribution in form of clothes, woollens, toys, footwear home linen and stationery.  Students segregated the offerings, gift-wrapping and packing them under different categories,to be distributed at predetermined locations in Vastrpur.

A group of 13 students were taken to a visit to the Kautilya Museum of Accounting, a first of its kind of museum. They were introduced to the history of Accountancy and spent a fruitful time interacting with Ph.D students at the P.G. Centre of the School of Commerce ,Gujarat University. 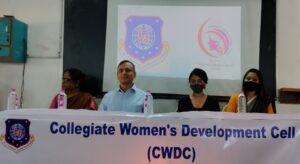 3rd March, 2021: Seminar on Listening skillsA seminar was organised on Listening Skills. Ms Jasmi Sugunan, Ms Anandita Patel & Mamtaben of Aadarsh Ahmedabad, were the chief guests for the event. Jasmi Sugunan is an Advocate, a consultant counsellor working with Psychological Development & Mental Health Foundation (PDMHF) and is a volunteer at Aadarsh Ahmedabad. She addressed the importance of better listening for a better interpersonal relationship for harmonious co-existence in the society.