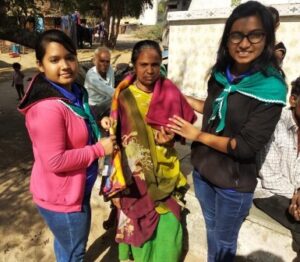 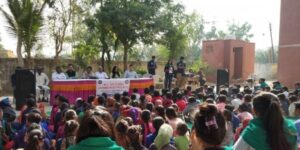 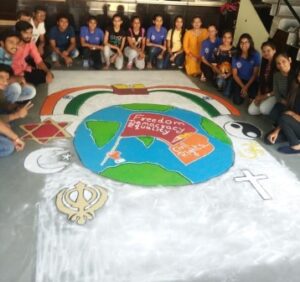 nality of students through community service. The Motto of NSS “Not Me…But You”, reflects the essence of self-governed living and su

pports the need for self-less service. The philosophy of the NSS is well doctrined in this motto, which emphasizes on the belief that the welfare of an individual is finally dependent on the welfare of the soc

iety as a whole and therefore, NSS volunteers shall strive for the well-being of the society. Today, NSS has more than 3.5 million students as volunteers on its roll spread over 298 Universities and 42 (+2) Senior Secondary Councils and Directorate of Vocational Education all over the country. From its inception, more than 3.75 crores students from Universities, Colleges and Institutions of higher education have benefited from the NSS activities.

At the college, the NSS began its activities in 2014 – 15. A team of NSS volunteers was formed under the leadership of Dr. Chirag Trivedi (Program Officer), and Sports Director Shri D B Rana. During the first year, more than thirteen social and educational activities were carried out. Under the banner NSS unit, seven days camp was arranged at “Khadiyarapura” village, Dist. Kheda (which is adopted for three years) and the various “Gram Sibir” and cultural activities were performed. During the second year i.e. 2015 – 16 more than twenty three activities – like awareness rallies on social issues, plantation, workshop on best out of waste, seminar on basic Civil Caw, Traffic Rule Awareness, Thalassemia,  Blood Donation camp, Gram Sibir, Health-Checkup camps, Eye- Checkup camps were successfully carried out.

NSS committee of the college:

A trip was arranged to Kaleshwari Nature Education Camp site, managed by Lunavada Forest Department on 02/04/18 and 03/04/18

The program had 3 parts:

The first part was the Grand Finale of the Public Speaking Contest. The contest was conducted in 60 colleges of Ahmedabad and the final 7 contestants went through 3 rigorous rounds to reach the finale.We congratulate all participants and are very proud of Om, our own student who won the 1st prize and also the trophy for the college.

The second section was a cultural programme presented by our students, which began with the rendition of “Jai Garvi Gujarat”, featured a Dangi Dance and Garba and a hard-hitting skit on Education. All the performances were highly appreciated by the audience.

The star attraction of the programme was a motivational speech by Shri Sanjaybhai Raval. Talking on Society, Relationships, Lifestyles and Living, Sanjaybhai kept the audience in the interactive mode thinking and responding aloud.

With a major following across Social media Shri Sanjaybhai Raval is a very well-known speaker on Fearless living and Personality Development. His mission in life is to motivate students for believing in themselves and promote reading and exercise. He has conducted more than 900 seminars over the last 5 years.